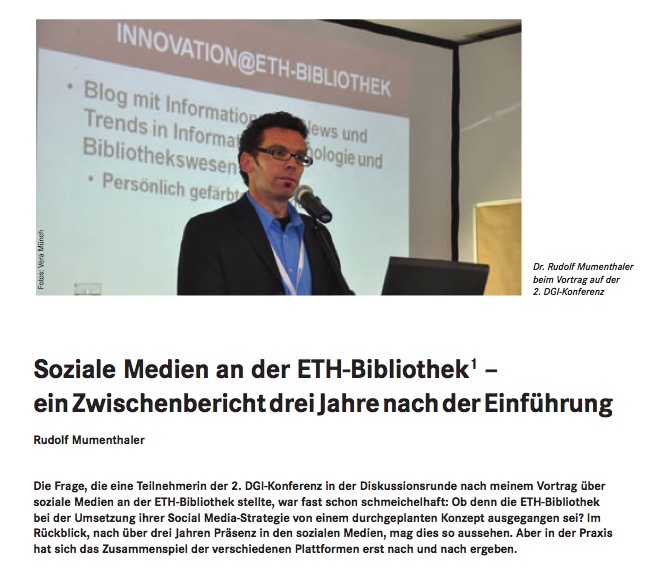 It was my last presentation and article as a representative of ETH library. My presentation held at DGI Conference 2012 was published now as an article in B.I.T.online, unfortunately not open access, so you can read it only if you or your library subscribes to the journal. http://www.b-i-t-online.de/heft/2012-02/nachrichtenbeitrag-mumenthaler.pdf 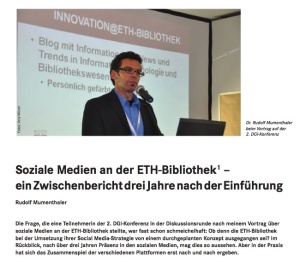 But for the readers of my blog I try to give a summary of the article. One main result of three years activities on social networks is the insight that it is really difficult to address directly to your target group. ETH-Bibliothek has quite a lot of fans on Facebook or followers on Twitter, but you don’t know which background they have. When creating a Facebook ad you can filter target groups. I tried to reduce the group to students at ETH that are also fans of the library – but the number was too small (less than 20, obviously). That doesn’t mean that there are only that few fans among the students, but only a smaller part indicates on Facebook that they study at ETH Zurich. I guess that most of the library’s fans are interested to libraries at all or they even are librarians…

One very interesting case was the discussion of the case publishers vs ETH-Bibliothek. At the end of 2011, the International Association of Scientific, Technical and Medical Publishers (STM) lodged a complaint against the document delivery service of the ETH-Bibliothek at the Commercial Court of Zurich. At first the renowned Swiss newspaper NZZ wrote about it. Then Dr. Wolfram Neuauber, director of ETH-Bibliothek, published an article in ETHLife, the electronic news channel of ETH Zurich.  Now it was interesting to see, how the different social media took on the discussion.

At first there were some readers comments on the website of ETHLife. Then we published the article also on the library’s Facebook page. But there was nearly no feedback: only seven fans „liked“ the post. I guess that the content was too complex to be commented only with „I like“. And there was no discussion about the subject. The reaction on Twitter was more intense: our monitoring counted to 69 tweets or retweets. So the article was widely spread by our Twitter follower. But of course, there was no deeper discussion of the subject on Twitter. To my surprise Google+ turned out to be the social media platform with the most lively discussion: user „Joan Baez“ published his blog post about the case on Google+. Then there were 30 answers on this post with substantial content. Furthermore 104 persons shared this article and 149 gave it a +1. Finally I recognized how Google+ can serve as a powerful media to discuss also complex matters.

As a conclusion we can say that the library’s activities on social media are noticed by the public – not so much by the intended target groups, but by a broader public interested in libraries in general. And those activities contributed to create the image of a modern and innovative library within the university. 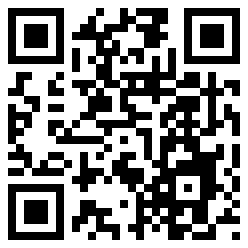